Cristina of My Little World of Traveling is here today bringing a Spanish treat to the ‘Recipes Around the World‘ series!

Torrijas are one of my favorite sweets because they bring me lots of memories of Spain during Easter with my grandma. She’s always been my inspiration to cook since I was a kid. I used to love watching how she cooked and learning from her.

She’s the one who taught me how to make the delicious torrijas. They seem simple to make, but you need to practice to get the perfect torrijas.

You can find them in any local pasteleria (bakery) around Easter. But there’s nothing better than grandma’s recipe for a tasty treat year-round. It’s believed that torrijas originated during the time of the Romans, but they weren’t linked to the religious holiday back then. It’s said that that they were given to women who just gave birth to recover and relieve the pain.

However, during the Middle Ages, people used to eat them during Lent in lieu of meat—as bread was a good substitute to fill them up!

It’s a humble and cheap recipe that many used to eat during difficult economic times. It makes use out of old bread—so nothing goes to waste. Over the years, many different varieties have popped up and now there are tons of ways to make them, from chocolate torrijas to savory ones. This recipe serves four people (8 torrijas, with 2 torrijas per person); it takes roughly 20 to 30 minutes to make. Tips and Tricks From Grandma

Bread is the key ingredient for a good torrija. A dry bread absorbs the milk better and that’s why it’s better to use bread from the day before.

Instead of using ground cinnamon and sugar, you can cover torrijas with honey. For this, warm up some honey with a bit of water to create a smoother texture and pour it over torrijas.

Have them with a glass of dessert wine. (Yes, please!)

Food can make our travel experiences even better. I encourage you to experience Spanish Easter and try the delicious torrijas. You won’t forget its sweet flavor. 🙂

If you happen to be in Málaga, my hometown, try torrijas al vino moscatel. They are made with the famous Málaga’s sweet wine.

Want to learn more about Spanish foods? Here are 10 amazing tapas you have to order in Spain! 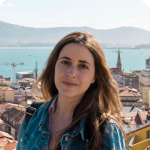 Cristina Reina is a Spanish ex-pat and travel blogger based in the UK. As a passionate traveler, she shares her authentic experiences and stories on My Little World of Travelling. Her blog is dedicated to female travelers and features local travel guides, travel tips, and ex-pat life.